Members of the Music Commission

Washington, DC: The Holy Myrrhbearers Diocesan Women’s Choir adorned the divine services in St. John the Baptist Cathedral
In the joyous Paschal days celebrating the holy Myrrhbearing Women, at the invitation and with the blessing of the rector, Archpriest Victor Potapov, and at the initiative of the choir’s longtime friend Sergey Olhovsky, members of the Holy Myrrhbearers Diocesan Women’s Choir, headed by director Eugenia Temidis, arrived at St. John the Baptist Cathedral in Washington, DC, to mark their patronal feast day at the divine services in honor of their heavenly patronesses.

Ligonier, PA: The Chairwoman of the EADMC represented ROCOR at the Summer Music Institute of the Antiochian Archdiocese 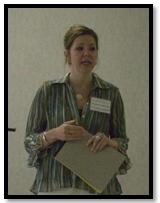 August 11, 2010
With the blessing of the First Hierarch of the Church Abroad, His Eminence, Metropolitan Hilarion, Eastern American Diocesan Music Committee Chairwoman Elizabeth A. Ledkovsky accepted an invitation from the Antiochian Archdiocese’s music department to be the Russian Orthodox Church Outside of Russia’s official representative at the 25th annual Summer Music Institute (SMI) at the Antiochian Village Conference Center in Ligonier in southwestern Pennsylvania. 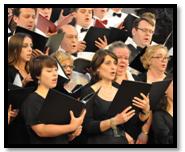 June 27, 2010
On Saturday the 19th and Sunday the 20th of June, parish singers and choir directors of the Eastern American Diocese gathered in Boston, MA to participate in the International S.V. Rachmaninoff Russian Music Festival, being held June 13-20. 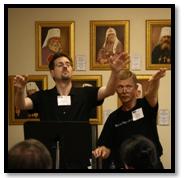 June 4, 2010
From Friday the 28th through Saturday the 29th of May, the Cathedral of St. John the Baptist in Washington, DC, hosted the first interactive seminar for church musicians, presented by the Eastern American Diocesan Music Committee. Developed in response to a 2009 survey of the liturgical musicians of the diocese... 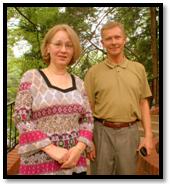 June 4, 2010
On Saturday, May 29, on the last day of the church musician’s conference in Washington, DC, diocesan Media Office correspondent Reader Peter Lukianov conducted an interview with members of the Eastern American Diocesan Music Committee (EAMDC) – Youri A. Petcherkin, choir conductor of St. John the Baptist Cathedral in Washington, and Matushka Eugenia Temidis, conductor of the Holy Myrrhbearers Women’s Choir.

Beltsville, MD: "A Church Singer’s Companion" is being published in English on the website of the Eastern American Diocese 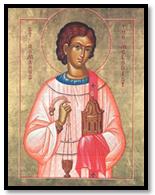 May 27, 2010
We would like to inform the readers of the diocesan site that, in the Eastern American Diocesan Music Committee section of the website, "A Church Singer’s Companion" is being published in English. Vocal sheet music in English is being published by St. Romanos the Melodist Society under the direction of Archpriest George Johnson, member of the Diocesan Music Committee and rector of Holy Apostles Church in Beltsville, MD.

Washington, DC: An interview with Y.A. Petcherkin on Russian radio

May 17, 2010
On May 14, the "Grad Petrov" ("Peter’s City") Orthodox radio station in St. Petersburg, Russia, aired an interview with Mr. Youri Petcherkin, the choir director of St. John the Baptist Cathedral’s Slavonic choir. Click here to listen to this Russian-language broadcast with excerpts of the choir’s recordings. 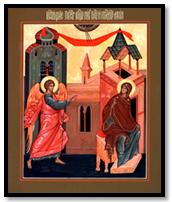 March 25, 2010
The is pleased to share music for the Great Feast of the Annunciation, which coincides this year with Bright Wednesday, placing special demands on church choirs. Several musicians have labored for many hours to create and compile music scores in both Slavonic and English. The EADMC has also published new sheet music in English for the services of Passion Week, Pascha, and Annunciation.

March 6, 2010
The EADMC is pleased to offer parishes a copy of the full canon of the Great Feast of Annunciation, with troparia, in Slavonic, for use at Matins of March 25/April 7, 2010. Because the feast falls this year during Bright Week, it is proper to sing, and not read, all the appointed texts.

November 9, 2009
New York: Metropolitan Hilarion led the divine services, dedicated to the memory of P.G. Chesnokov, in the Synodal Cathedral

September 7, 2009
Report from the Chairperson of the EADMC to the Diocesan Council

July 9, 2009
Myrrhbearers. A unique choir in the Russian Diaspora.

Online Survey is now available for
all Rectors and Choir Masters

May 3, 2009 EADMC holds its initial meeting in Jackson

April 25, 2009
Decree of Met. Hilarion on the establishment of the EADMC